Imitation is often seen as one of the crucial foundations of culture because it is the basis of  social learning and social transmission. Only by imitating others and learning from them did human culture become cumulative, allowing humans to build and improve on the knowledge of previous generations. Thus, it may be one of the key cognitive specializations that sparked the success of the human evolutionary story:

Much of the success of our species rests on our ability to learn from others’ actions. From the simplest preverbal communication to the most complex adult expertise, a remarkable proportion of our abilities are learned by imitating those around us. Imitation is a critical part of what makes us cognitively human and generally constitutes a significant advantage over our primate relatives (Lyons et al. 2007: 19751).

Indeed, there have been some interesting experiments suggesting that the human capacity -and, above all, motivation – for imitation is an important characteristic that separates us from the other great apes.

In a series of intriguing experiments by Victoria Horner and Andrew Whiten from the University of St. Andrews in Scotland, and Derek Lyons and his colleagues from Yale University,  young wild-born chimpanzees and Children aged 3 to 4 were shown how to get a little toy turtle/ a reward out of a puzzle box. In the first condition of the experiment the puzzle box was transparent, whereas in the second condition the puzzle box was opaque.

And here’s the catch: both chimpanzees and children were not shown the ‘right’ or ‘simple’  solution to how to get the reward but one that was actually more complicated and involved unnecessary steps. (You only have pull out the red thing at the bottom to get to the reward, but the demonstrator also removed the tube on the top of the box and pushed a stick into the box, touching the blue tube that was inside)

The stunning result was that in this task, the chimps proved ‘smarter’ than human children.

If the box was opaque chimps and children were unable to look at the internal workings of the puzzle box and were thus unable to assess which steps were necessary and which unnecessary. In this condition, both copied all the actions shown by the demonstrator.

However, if the the puzzle box was transparent, and children and chimps in principle were able assess which steps were necessary and which were not, chimps only copied the relevant actions – and human children still copied every action, including all the obviously unnecessary ones. This phenomenon is called overimitation. For most tasks in the real world whose causal or internal structure we don’t understand, it pays to closely match the behavior of a more knowledgeable person. However, although in general this  is a very powerful learning strategy, it often carries a cost. As it seems, in children this process is sometimes so automatic that it overrides any relevant causal reasoning about the task itself:

Children who observe an adult manipulating an unfamiliar object show a strong tendency to encode all of the adult’s purposeful actions as causally meaningful, revising their causal beliefs about the object accordingly.” (Lyons et al. 2007: 19756)

differences in the behaviour of chimpanzees and children can best be explained by a combination of a differential focus of attention on actions, results and goals, with the latter possibly influencing the interpretation of the actions of the demonstrator as purposeful.

However, they also see this as part of a more general tendency of adhering to cultural conventions and norms (Whiten and Horner 2005: 164), something which, albeit in a rudimentary form, is also present in chimpanzees (Whiten et al. 2005: 164).

Indeed, there is a lot of evidence suggesting that

Humans, from very early in life, have a strong motivation to share experiences and activities with others, and to align themselves with and be like others (Carpenter 2011: 122).

That is, from an early age children show some sensitivity for social conventions and norms, and have a desire to conform to them. 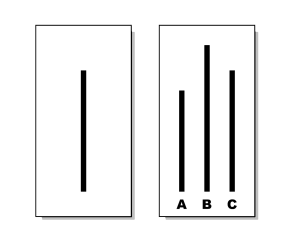 Even more strikingly, by age 3 young children often conform to the opinion of the majority, even when the majority is clearly wrong. Walker & Andrade (1996), for example, presented children aged 3 to 6 with a card with a black line on it and then asked  them which one of the three lines on a second card was the same length (the Asch test). When the majority of their other classmates (who were told to give wrong answers) in the room gaveswrong answers about which line is the same, young children conformed to the wrong majority opinion. In contrast, in a control condition withouth this kind of conformity pressurethey pointed out the correct line.

Overall, imitation, conformity, and overimitation clearly prove to be an important part of what makes us human, but is it really right to say that chimpanzees “Don’t Give a Hoot About Unnecessary Actions”?

Well the problem is that Whiten and Horner’s experiments  where done with wild chimpanzees.

But what about enculturated chimpanzees raised by humans? And what are the foundations of overimitation in humans? At what point in development do they start to become sensitive to the goals and intentions of others?

I will return to these questions in my next post.

Rakoczy, Hannes, Felix Warneken and Michael Tomasello ( 2008 ): “The sources of normativity: Young children’s awareness of the normative structure of games” In: Developmental Psychology 44:875 -881 .

5 thoughts on “Imitation and Social Cognition in Humans and Chimpanzees (I): Imitation, Overimitation, and Conformity”