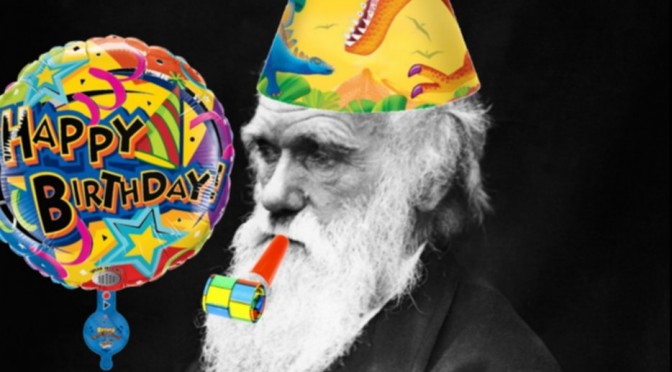 I had hoped to celebrate Darwin day with a longer post discussing how language is often viewed as a challenging puzzle to natural selection. My main worry is that the formal design metaphor used in much of linguistics has been used, incorrectly IMHO, to divert attention away from studying language as a biological system based on organic logic. If this doesn’t make much sense, then you can do some background reading with Terrence Deacon’s paper, Language as an emergent function: Some radical neurological and evolutionary implications. Alas, that’s all I have to say on the matter for now, but if you’re looking for something related to Darwin, evolution and the origin of language, then I strongly suggest you head over to the excellent Darwin Correspondence project and read their blog post on the subject:

Darwin started thinking about the origin of language in the late 1830s. The subject formed part of his wide-ranging speculations about the transmutation of species. In his private notebooks, he reflected on the communicative powers of animals, their ability to learn new sounds and even to associate them with words. “The distinction of language in man is very great from all animals”, he wrote, “but do not overrate—animals communicate to each other” (Barrett ed. 1987, p. 542-3). Darwin observed the similarities between animal sounds and various natural cries and gestures that humans make when expressing strong emotions such as fear, surprise, or joy. He noted the physical connections between words and sounds, exhibited in words like “roar”, “crack”, and “scrape” that seemed imitative of the things signified. He drew parallels between language and music, and asked: “did our language commence with singing—is this the origin of our pleasure in music—do monkeys howl in harmony”? (Barrett ed. 1987, p. 568).