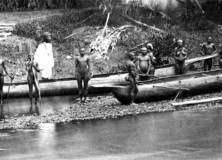 Last week we had a lecture from Anvita Abbi on rare linguistic structures in Great Andamanese – a language spoken in the Andaman Islands.  The indigenous populations of the Andaman Islands lived in isolation for tens of thousands of years until the 19th Century, but still exhibit some common features of south-east Asian languages such as retroflex consonants.  This could be evidence for the migration route of humans from India to Australia.  Indeed, recent genetic research has shown that the Andamanese are descendants of the first human migration from Africa in the Palaeolithic, though Abbi suggested that the linguistic evidence is also a strong marker of human migration and an “important repository of our shared human history and civilization”.

Although the similarities are fascinating for studies of cultural evolution, the rarity of some structures in Great Andamanese are even more intriguing.

The structures are rare in two senses:  To start with, the number of speakers has declined rapidly over the last few decades – there are only around 10 speakers left.  Most importantly for the talk, however, was the highly complex system for marking inalienability (things which cannot be transferred from the individual), based around 7 body-part classes.   Here is a table of the markers with the associated parts of the body:

Although the classifications above are largely coherent, the classes exhibit a great deal of variation, too.  For example, ɛr- marks body parts as diverse as the forearm, brain and urine.  The classes can be used to create lexical distinctions between ot-cala (a scar left by an arrow-head), er-cala (a scar on the head) and oŋ-cala (a scar on the limbs).  However, the distinctions also extend into other parts of the language. For example, the mouth of a vessel receives a class 1 marker, and the branch of a coconut tree receives a class 2 marker while the sound of rain receives a class 4 marker.  The manner of verbs can also be indicated:  ut-ʃile means ‘to aim from above’, ek-ʃile means ‘to aim at’ and e-ʃile means to ‘aim to pierce’.  In all, there are ten different ways of denoting inalienable possessiveness.  For example, the word for a pig’s head is ra ɛr-co, but a pig’s head when it has been cut from the body is ra t-ɛr-co.  The class markers are also used in adjectives, adverbs and intransitive verbs.

Abbi claims that there are no known linguistic systems like this anywhere else, which invites the question – how did it emerge?  Isolation must be part of the answer, but rare linguistic structures fit better with a weak-bias plus cultural transmission view of language than with a strong, language-specific bias approach.  Cysouw and Wohlgemuth (2010) argue that in the debate about language universals, relatively little attention has been given to ‘the other end of the scale’: features that are incredibly rare and do not seem to be explained by migration.  These cases are as valuable as linguistic universals, they argue, because we can learn about the full limits of human language.  Their book on rare linguistic structures Rethinking Universals looks well worth a read (preview available on Google books here).

Abbi argues that there is a correlation between the rarity of a linguistic structure and the endangerment status of its language, so there is an even greater pressure to record these languages before they become extinct.

Abbi also mentioned a tribe called the Sentineli who have been extremely hostile to contact from other cultures.  Virtually nothing is known about their language because they start shooting arrows at any approaching boats and, as Abbi calmly put it, “some of those arrows are quite poisonous” (although there is a fascinating video here of a relatively friendly first-contact style encounter).  It’s good to know that linguistics is still an adventurous undertaking.

Cysouw, Michael & Jan Wohlgemuth. 2010. The other end of universals: theory and typology of rara. Introduction to Rethinking Universals: How rarities affect linguistic theory, 1-10.

Note: The featured image is a photograph of some Andamanese islanders which shows “A remarkable photograph of 1875 (by E.H. Man) showing the influence the new masters were having on islanders’ daily life and technology only 17 years after the British took over. In the foreground is a traditional Great Andamanese outrigger canoe used mostly for fishing. There was no travel over longer distances in pre-British times. In the background is the much longer, new-style outrigger-less canoe that could transport more people over longer distances. The people standing around their vessels are Great Andamanese (some with their traditional weapons) with a supervising Indian Jemadar at the back.”

7 thoughts on “Great Andamanese: The key to more than one linguistic puzzle?”