In 2007, Dan Dediu and Bob Ladd published a paper claiming there was a non-spurious link between the non-derived alleles of ASPM and Microcephalin and tonal languages. The key idea emerging from this research is one where certain alleles may bias language acquisition or processing, subsequently shaping the development of a language within a population of learners. Therefore, investigating potential correlations between genetic markers and typological features may open up new avenues of thinking in linguistics, particularly in our understanding of the complex levels at which genetic and cognitive biases operate. Specifically, Dediu & Ladd refer to three necessary components underlying the proposed genetic influence on linguistic tone:

That the genetic makeup of a population can indirectly influence the trajectory of language change differs from previous hypotheses into genetics and linguistics. First, it is distinct from attempts to correlate genetic features of populations with language families (e.g. Cavalli-Sforza et al., 1994). And second, it differs from Pinker and Bloom’s (1990) assertions of genetic underpinnings leading to a language-specific cognitive module. Furthermore, the authors do not argue that languages act as a selective pressure on ASPM and Microcephalin, rather this bias is a selectively neutral byproduct. Since then, there have been numerous studies covering these alleles, with the initial claims (Evans et al., 2004) for positive selection being under dispute (Fuli Yu et al., 2007), as well as any claims for a direct relationship between dyslexia, specific language impairment, working memory, IQ, and head-size (Bates et al., 2008).

A new paper by Dediu (2010) delves further into this potential relationship between ASPM/MCPH1 and linguistic tone, by suggesting this typological feature is genetically anchored to the aforementioned alleles. Generally speaking, cultural and linguistic processes will proceed on shorter timescales when compared to genetic change; however, in tandem with other recent studies (see my post on Greenhill et al., 2010), some typological features might be more consistently stable than others. Reasons for this stability are broad and varied. For instance, word-use within a population is a good indicator of predicting rates of lexical evolution (Pagel et al., 2007). Genetic aspects, then, may also be a stabilising factor, with Dediu claiming linguistic tone is one such instance:

From a purely linguistic point of view, tone is just another aspect of language, and there is no a priori linguistic reason to expect that it would be very stable. However, if linguistic tone is indeed under genetic biasing, then it is expected that its dynamics would tend to correlate with that of the biasing genes. This, in turn, would result in tone being more resistant to ‘regular’ language change and more stable than other linguistic features.

To test if these features are indeed stable, Dediu employs a Bayesian phylogenetic approach to compare a large body of linguistic features and language families from WALS. Without going into specific methodological details, the current study uses “multiple software implementations, data codings, stability estimations, linguistic classifications and outgroup choices” to provide a greater degree of robustness. His general findings suggest linguistic tone is comparatively stable: both as a polymorphic feature (8th out of 68 polymorphic features) and in its two binary aspects (simple tone systems, 23rd out of 86; complex tone systems, 8th out of 86). 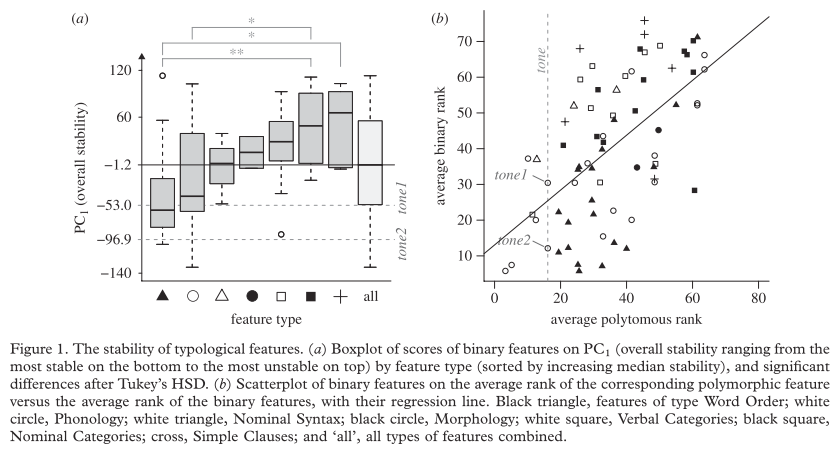 Besides tone, the current study also turned up other interesting patterns. For instance, the presence of front rounded vowels appears to be extremely stable and shows a skewed geographical distribution, perhaps indicating a new case of genetic biasing. Dediu additionally points towards alternative methods to specifically test the genetic biasing hypothesis, such as correlated evolution (the extent to which change in one trait is associated with change in another). For now, though, I want to remain focused on tone. In particular, another new study by Javikivi et al (2010) draws into question some of the distinctions linguists make between tone and duration.

For those of you who are relatively lay on the subject: speakers of tone languages use variation in the fundamental frequency (F0) to perceive differences in lexical meaning. Conversely, for those of us who speak non-tonal languages, such as English, the fundamental frequency is used in other functions (e.g. extra-linguistic aspects, such as emotional content). Another commonly made distinction are those languages where durational information relays these differences in lexical meaning. Finnish is a good example of this and these types of languages are known as quantity languages. One last point to make is how these phonological phenomena of segments, tones and length appear discrete and categorical, very much like colours in vision, yet this apparent conscious perception of speech sounds is actually continuous.

Now, what Jarvikivi et al present is evidence to suggest both duration and pitch are intimately related, challenging our assumptions of there being a clear-cut conceptual distinction. Besides reviewing a whole load of literature suggesting at such a relationship, the authors also offer two experiments, of which I’ll cite their conclusions:

Experiment 1 showed that, in addition to duration, participants’ categorization of syllables as long or short was robustly dictated by whether the relevant (first) syllable had a level or a falling tone corroborating similar observations in previous studies… More importantly, however, the result from Experiment 1 extended to Experiment 2 where we showed for the first time that the effect of tonality is not restricted to simple offline categorization, but is systematically and automatically used by speakers in rapid online word recognition to identify phonological quantity.

In relation to Dediu’s current paper, and his previous work with Robert Ladd, the typological generalisations, which includes quantity languages in the non-tone sample, may need revising somewhat. With Jarvikivi et al.‘s results, the use of pitch to mark and process phonological distinctions does not necessarily mean a language is categorised as a tone language. A remedy to this problem, albeit one which is very difficult to implement, would be to directly test whether those genotypes associated with tone and non-tone languages are “equally sensitive to tone information without the confounding influence of language background entering the picture”.

Of course, even if the typological categories were reclassified, this would in no way be a direct refutation of the genetic anchoring hypothesis, and nor is it probably adequate to rule out the significance of the ASPM/MCPH1 and tone correlation. Jarvikivi et al‘s point is one where we cannot unequivocally state that the Finnish quantity system is solely based on a heightened sensitivity to acquire and process durational information. Instead, we must also take into account its sensitivity to pitch information as well. Still, it may be the case there are differences between prototypical tone languages and those such as Finnish. For one thing, Finnish speakers could be less sensitive to pitch, as the authors note:

To conclude, if future experimental work confirms the results and hypotheses reported by Dediu, then approaches in linguistics and biology will be significantly altered. Still, even if it turns out the relationship between these two derived haplogroups and tone is non-existent, the overarching approach applied in this paper certainly warrants future investigation and elucidation.

Dediu D (2010). A Bayesian phylogenetic approach to estimating the stability of linguistic features and the genetic biasing of tone. Proceedings. Biological sciences / The Royal Society PMID: 20810441

2 thoughts on “Genetic Anchoring, Tone and Stable Characteristics of Language”