Languages can use pitch to make lexical contrasts (so called tone languages) or to mark contrasts at the utterance level, usually called intonation, such as using rising pitch to indicate a question as opposed to a statement.  In fact, a language can use pitch to do both by various means such as changes in pitch range.  However, lexical tone and intonation are often seen as mechanisms that compete for pitch resources.  Yip (2002) holds that “it is commonplace that many lexical tone languages avoid the potential conflicts between intonation and lexical tone by using a different mechanism altogether: the sentence-final particle.”

Can we see the evolutionary effects of this dependency in the typology of the world’s languages? (at the very least, the terminology is in competition!  I’ll use ‘intonation’ to mean phrase-level pitch)

A recent paper by Francisco Torreira, Harald Hammarström and myself uses two typological databases to tackle this question (link to paper).

We ran the following tests:

Our main findings were:

Estimated probability of exhibiting grammatical polar-question marking for languages with and without a lexical tone system. 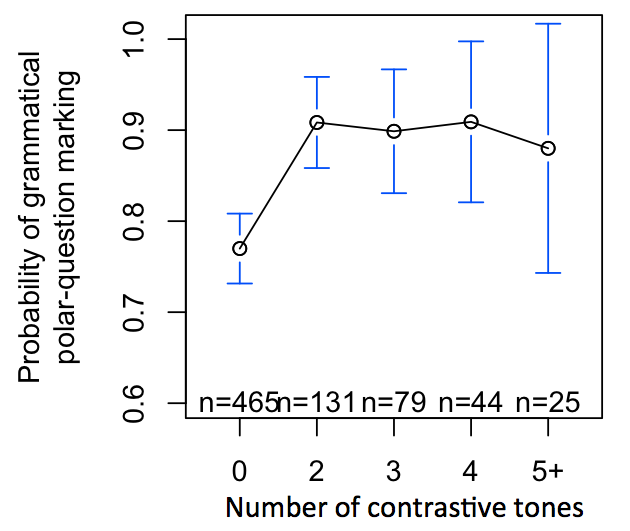 Results from the ANU database. 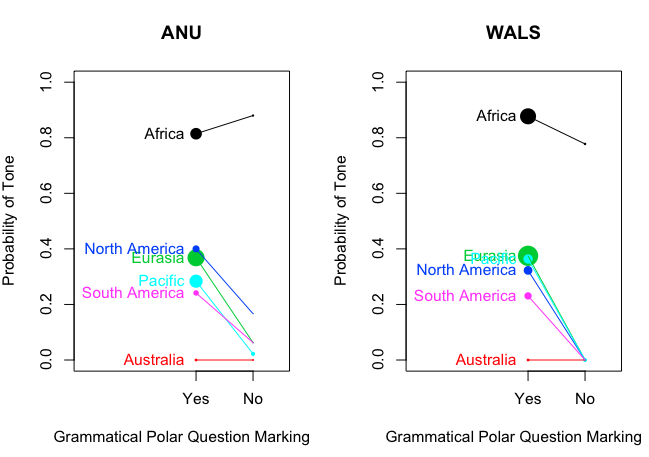 We conclude that there is strong support for a functional dependency between lexical tone and question intonation:  Lexical tone languages tend to avoid potential conflicts with utterance-level intonation by making use of grammatical devices.  However, the dependency itself is not a strict rule, but a statistical tendency.

You can read the details of the analyses here.

The next question is the direction of causality.  It would be possible to test different models of cultural evolution to determine the probability of a language gaining or acquiring tone as a function of gaining or acquiring question intonation (e.g. using Bayesian Phylogenetics).  However, at the moment we don’t have enough data on marking question intonation within a single language family to carry out such an analysis.  Getting solid data on whether a language can only use intonational means of signalling questions is also tricky, since many grammar descriptions see this as a peripheral issue.  We also hope to expand our analyses in the future to other aspects of intonation.

We hope we’ve shown that it’s possible to robustly demonstrate a linguistic dependency with a range of data sources and methods, controlling for the effects of genealogy and geography.

3 thoughts on “Functional trade-off between lexical tone and intonation”