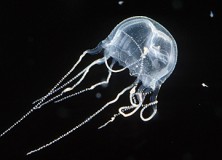 Massimo Piattelli-Palmarini’s talk at this Evolang gave an impressively confident and forceful argument for linguistic nativism. The basic tenets of the Chomskyan view of language evolution were reiterated with some old and some new arguments along the way. Piattelli-Palmarini (P.P.) claimed that (1) language is modular and autonomous from other cognitive systems, (2) syntax dominates other aspects of language such as semantics, and (3) that language has not arisen through natural selection because it is a non-adaptive trait. In line with Chomskyan syntactocentrism, syntax was argued to be the major evolutionary transition in the evolution of language.

Generally, it is a good thing to have strong arguments for a particular position because it spurs discussion and excites new research. However, P.P.’s arguments very much neglected or belittled major empirical advances in evolutionary linguistics and cognitive science. If this new evidence is taken into account, the picture that emerges is very different from what P.P. argued for.

First, let’s discuss the argument of non-selection. To make language evolution without natural selection sound more believable, P.P. gave the biological example of the cubozoan jellyfish Tridpedalia cystophora, which – according to him – has non-functional globular eyes. According to P.P.’s argument, the jellyfish have no brains to put the information obtained from the eyes to use, and because complex eyes do not seem to be necessary above and beyond simple photoreceptors, the complexity seems to have no function and thus pose an example of complex structure that could not have arisen through natural selection.

In this almost Creatonist argument, the biological facts about cubozoan jellyfish were completely distorted. A very brief literature review suggests that biologists were indeed baffled about the functionality of the eyes, but recently, there are many studies showing that the eyes’ lenses have complex functional optics (Nilsson et al., 2005), are connected to the central nervous system of the jellyfish (Garm et al., 2006) and govern behavioral responses (Coates, 2003). Now, it is intriguing how one could claim with certainty complete non-functionality in light of these studies that have been published long before the talk. Furthermore, Coates (2003) was cited by P.P. as one reference with respect to the jellyfish eyes being non-functional … but this paper actually proposes that the complex eyes are used to exploit near-shore food resources, certainly a functional trait. All of this sounds far away from the claim that “no adaptive explanation is in sight” for this particular phenomenon.

The jellyfish example was rhetorically used to “cast doubt” on natural selection and adaptationist thinking in biology and language evolution, but even though a lot of biologists are indeed researching non-selectional processes in evolution (e.g. genetic drift, self-organization), just “casting doubt” on an account is simply not enough to substantiate one’s own theoretical position. In line with recent “biolinguistic” thinking in the Chomskyan tradition, P.P. seemed to suggest a saltational evolution of language, where complex syntax evolved in one big leap. This seems to follow from the Chomskyan view of language as a non-adaptive trait (which P.P. reiterated). But given the obvious functionality of language today, and given that there were other biological adaptations towards language (e.g. direct cortical connections to the larynx, a complex breathing apparatus), it seems strange to assume that language is not “for” communication at all just because of one’s theory.

Going to the modularity claims made by P.P., there was no mentioning whatsoever of the vast amount of literature suggesting that language interacts with almost every cognitive faculty one can imagine (see the many many studies mentioned in The Continuity of Mind by Michael Spivey, 2007). In fact, most cognitive scientists and neurobiologists today view language as a highly interconnected system, and there are a lots of arguments for the view that cognition writ large is an interaction-dominant system rather than a modular one (e.g. see, Ihlen & Vereijken, 2010). Interestingly, if one types in “modularity” and “language” into google scholar, one mostly finds studies from the 90s on the first page – whatever you may take from this, one cannot simply claim modularity without making reference to the large body of recent work suggesting interactions and continuity at every level of the brain. In fact, proponents of modular and abstract symbol processing accounts of cognition still haven’t come up with an adequate proposal of how a distributed and interconnected system such as the brain (we know this from physiological studies) could in fact realize completely encapsulated cognitive systems.

In the discussion after the talk, P.P. furthermore stated bluntly that “connectionism doesn’t work” – despite the fact that Elman has demonstrated as early as 1991 that neural networks can process complex hierarchical structures. Also, never were any of the findings in the cultural evolution of language mentioned. What are we to make (from P.P.’s perspective) of the successes of iterated learning and repeated interaction models, which can account for such important universals of language as compositionality, combinatorality, arbitrariness or recursion? If these can be explained based on very few assumptions in models of cultural evolution, why be unparsimonious and assume extra “innate” faculties?

Moving on, P.P.’s claim that “syntax dominates semantics” has to be qualified with respect to a lot of research which suggests that syntax interacts early on in processing with semantics (e.g. Palohati et al., 2005). The same applies to the purported independence of language and the motor system (see, e.g. Morten Christiansen’s work on the relation of a sequential learning in a visuo-motor task and syntactic processing).

Finally, P.P. talked about Genie, who did not acquire language during her “critical period” and thus presumably shows that the proposed innate language mechanisms need to be triggered in the right window – but Genie’s case is far more complex than that, as she was also deprived of adequate options for motor development (she was straightjacketed) as well as an adequate social environment. The exact same case can equally be used to argue for the importance of the motor system and sociality with respect to language. Either way, arguments from a single case such as Genie have to be weighed against a large body of experimental and computational evidence.

Now, as a generative linguist one might have objections against each one of the above-mentioned criticisms. However, it is crucial that these studies and this new evidence is addressed by generativists and not simply glossed over. Saying that “one cannot escape from syntax” (quote from the talk) and that “semantics has to bow to syntax” without substantiating in light of the newer literature doesn’t advance the generative paradigm, nor does it advance evolutionary linguistics. It speaks more to the isolation of the generative community from the rest of cognitive science as to anything else. A theory that has to rely on cherry picking and biased literature reviews is very much a theory that is in danger.