Last week I attended a lecture by Liz Bradley on chaos.  Chaos has been used to create variations on musical and dance sequences (Dabby, 2008; Bradley & Stuart, 1998).  I was interested to see whether this technique could be iterated and applied to birdsong or other culturally transmitted systems.  I present a model of creative cultural transmission based on this.

First, Chaos: Some formula produce unpredictable trajectories, for instance the Lorenz attractor.  Here’s what part of a trajectory looks like: 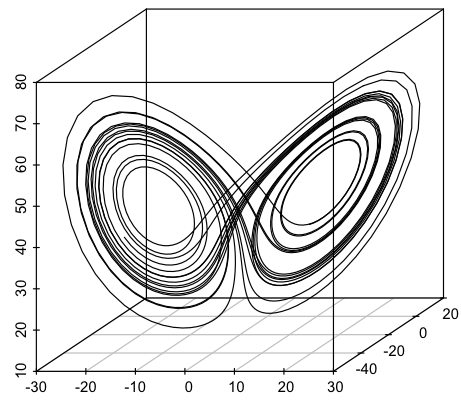 Pretty, isn’t it?  You can play with the dynamics using this applet.

Dabby (2008) used this to create variations of Bach’s Prelude in C Major from the Well-Tempered Clavier, Book I.  Here’s part of the original score:

And here’s the variation suggested by the chaotic mapping:

As you can here, the overall structure of the song is preserved, but the variations are new.  This happens because the chaotic trajectory sometimes follows a sequence of notes that was in the original ordering, but sometimes diverges, like a vinyl record  skipping over a track. This technique has also been adapted for generating dance choreography (Bradley & Stuart, 1998).

What I was interested in was whether this chaotic samping could explain some cultural phenomena.  I was reminded of  Soma, Hiraiwa-Hasegawa & Okanoya (2009)’s work on birdsong.  Bengalese Finches learn their songs from multiple tutors, with the resulting song of the tutee being a mix of elements from their tutors.  The diagram below shows two tutee’s songs (bottom) and how they were sampled from two tutors (top). 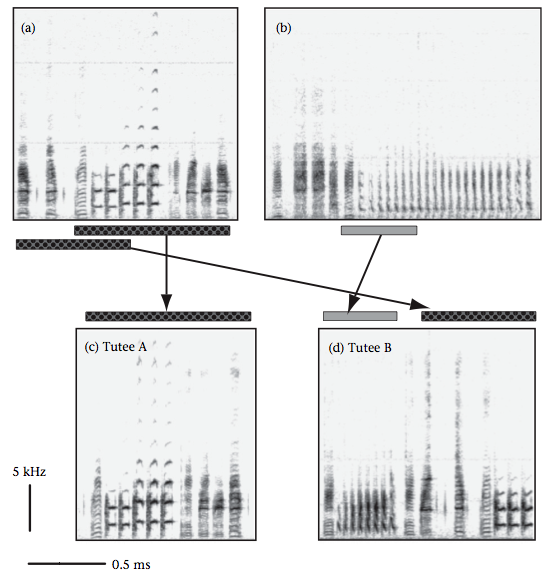 This sampling doesn’t appear to be random, but there is mixing.  Chaotic sampling could be a learning mechanism which produces novel sequences.  Male songbirds must strike a balance between two aspects:  Having a song that is similar to neighbouring birds is good for efficient territory establishment (see Soma et al.).   However, because song complexity is a marker of fitness, the song should be somewhat different from competing males, too.  That is, the best solution is a variation on a theme, not a radically different song altogether.  Chaotic sampling provides a way of interpolating between structure and randomness.  As a side-note, Lorenz attractors have been used previously to generate birdsong sonograms (e.g. Kiebel, Daunizeau & Friston, 2008). 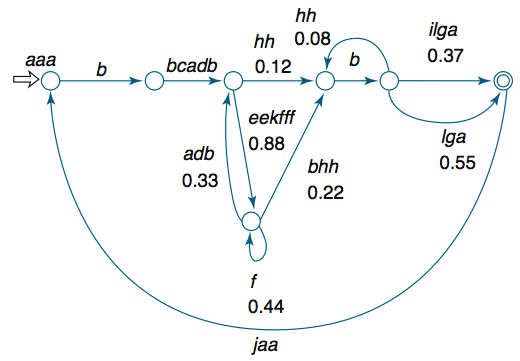 I generated two songs to represent the songs of two tutors (distinguished by tutor by capitalisation):
Song 1:

Chaotically sampling the song gives the following (broken up for clarity):

This captures the phenomenon of stretches of song from each tutor.  However, the resulting string clearly does not conform to the constraints on the original finite state automata.  That is, the song is successfully unique, but does not conform enough.  Perhaps the Lorenz attractor parameters were too chaotic.  However, this is an intriguing model which I can’t resist extending into the iterated learning paradigm.

I now have two questions:

2) Do strings generated by the ICSM become more structured over time?  Does structure emerge that could be boot-strapped by a semantic system?

I implemented an ICSM initialised with random strings with three possible ‘notes’.  The model started with a random sample of notes plus a special ‘end of song’ marker.  These were split into strings on this marker and the minimal finite state automaton (FSA) was generated that accepted those strings, a.  This gave a number of states and a number of transitions.  The original sample was then re-sampled using chaotic re-sampling.  This produced a different set of strings, and a second minimal FSA, b, was generated.  The minimal intersection, i ,  of a and b was calculated – this represents the smallest FSA,  that accepts strings from both generations. Comparing the the number of states and transitions between i and b gives a measure of how different the structure of the strings has become after re-sampling.  In other words, this measures how much the FSA has to grow to ‘understand’ both generations.  If this proportion is low, it suggests that the structure of the songs are similar between generations.  If this proportion is high, it suggests that the structure of the songs are different between generations.

Note that, so far, this model only includes on tutor.  Because it’s possible for a string to have fewer notes than its parent, I added a small probability of any note changing to any other at each generation.  Below is a diagram summarising the process: 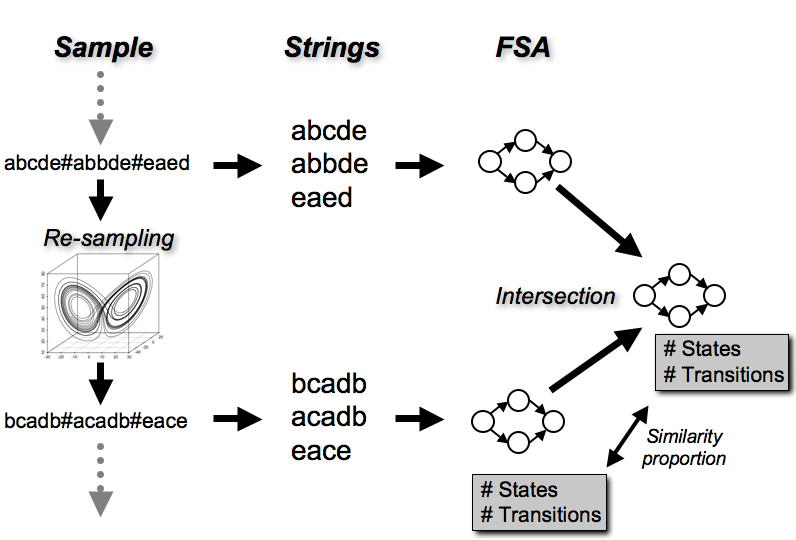 I’m still exploring the model, but here are a few results.  First, here’s a single run:

Below is the number of the states and transitions at each generation of FSA b.  The number of note types (between 1 and 3) in each sample is plotted in green.  The complexity of the FSA spikes periodically.  This may be due to the noise, since whenever a note is added due to nose the complexity increases (number of notes and number of transitions are correlated r=0.4, p<0.01).  However, it suggests that a large amount of complexity can sporadically appear.  This could be used for bootstrapping. 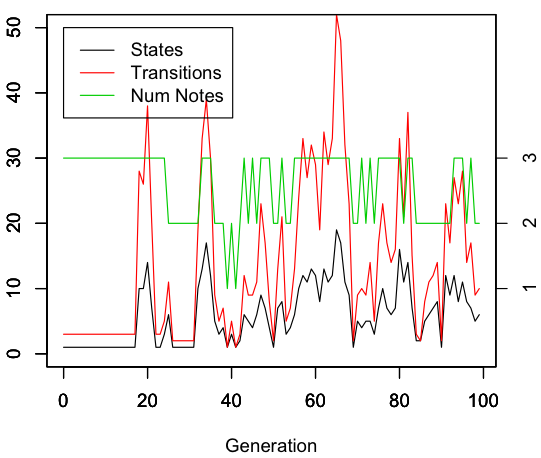 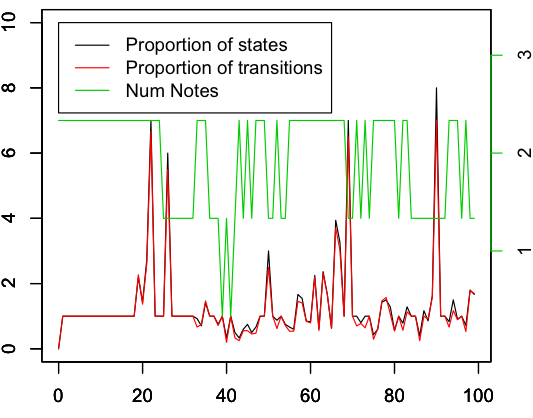 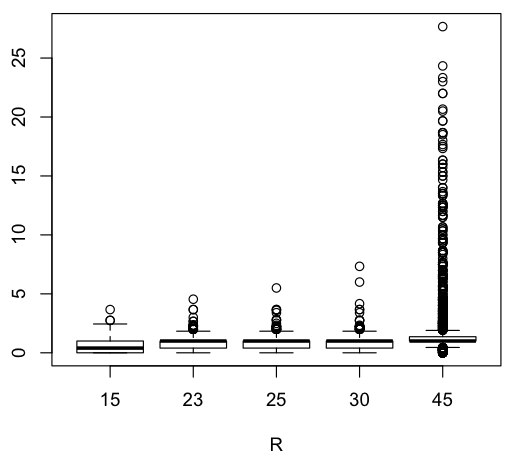