Published in Science today, 11.02.2011 (yey! palidromic date!) is a report on the find of a Complete Fourth Metatarsal and Arches in the Foot of Australopithecus afarensis. 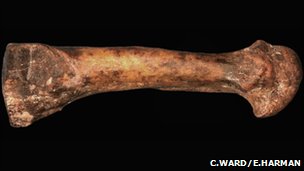 New fossil evidence from Hadar, Ethiopia suggests that our ancestors from 3.2 million years ago (Australopithecus afarensis (better known as Lucy)) had arches in their feet.

Arched feet are an essential part of the bipedal way that modern humans walk.

Although the skeleton of Lucy was found in 1974, until now important foot bones in all of the specimens uncovered to date have made it difficult for researchers to understand precisely how well adapted for bipedalism a. afarensis were.

Why should people interested in Language Evolution care about bipedalism? Well, here’s some food for thought:

1) Bipedalism likely had an impact on our cognitive abilities. As climbing as a form of locomotion became less common, different ways to cognitively represent space and distance probably had to be found. These new systems could have involved imitation (mirror neuron alarm bells start ringing). By adding imitative abilities to already existing spacial awareness that are seen in modern, non-human primates, this may have created mechanisms which allowed hominins to visualise themselves walking across plains (McWhinney 2005). This may have been the original selective pressure for imitative ability and therefore could have some implications for the imitative abilities which exist within language.

2) Upright posture would free up forelimbs which may have had communicative advantages as it would free the hands up for gesture. This theory has been somewhat rubished in that  the first apes to adapt a bipedal posture were probably cognitively not much different from today’s apes (assumed from evidence of skull size). However even if this was not the selective pressure FOR bipedalism it doesn’t stop it being relevant to the discussion.

3) Free hand movement would also lead to making tools. Stone tools getting more complex and language developing as evolution took place may show a close relationship between enhanced motor movement and language. Deficits in motor control are also often linked to aphasia so there is a strong connection between manual activity and speech communication.

4) When Chimpanzees and Gorillas are socializing in groups they go from a ‘knuckle walk’ to sitting in circles, this allows apes to keep eye contact with each other in social situations,  bipedalism would also allow one to keep eye contact at all times, even when in motion, and so the this may have been a selective pressure. Stanford (2003)

5) Evolution of the cortico-striatal neural circuits (basal ganglia) that regulate human language may have been shaped by the demands of upright bipedal locomotion. (Lieberman, 2001)

A lot of this debate is quite controversial but I thought I’d put some thoughts/theories out there in celebration of exciting new finds!

Lieberman, P. (2001) On the subcortical bases of the evolution of language. In Jurgan Trabant and Sean Ward, editors, New Essays on the Origins of Language, pages 21–40. Berlin-New York:Mouton de Gruyter.