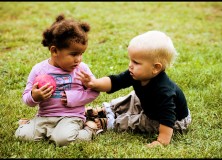 A forthcoming paper (grateful nod to ICCI) in PNAS from Olivier Mascaro and Gergely Csibra presents a series of experiments investigating the representation of social dominance relations in human infants, and it’s excellent news: we’re special.

Social dominance can be inferred in a couple of ways. Causal cues such as age, physical aggression and size can tell us about the dominance status of an individual quite intuitively, so we can make a sensible decision about whether or not we get into a scrap with them. Another way we can establish this is to look for direct realisations of dominance, such as who gets the banana if two hungry chimps both want it; chances are, little Pan Pipsqueak isn’t going to get a look in. In order to be useful, we also have to use this information to expect certain things from the individuals around us, so those representations have some property of stability across time that allows us to have those expectations. The question being explored in this paper is whether the representations we have are about the relationship between the two agents who want the banana, or the individual properties each of them has.

In a series of experiments using preferential looking time as a dependent measure, human infants (9 and 12 month olds) were exposed to videos of geometric figures exhibiting similar goal-directed behaviour. Then they would watch, say, a dominant triangle picking up the last figurative banana when the nondominant pentagon also wanted it. For expository purposes and posterity’s sake, I have constructed an artist’s impression of a dominant triangle and a subordinate pentagon in MSPaint (below, right):

I’m not just showing off my extraordinary artistic talent here; the good thing about these agents is that there are none of the cues like size or aggression that can give rise to the assignment of individual dominance properties. The task also doesn’t indicate anything similar; it’s just about who gets the desired object when there’s only one left. In other words, the goal-directed actions of two agents are in opposition. After seeing a triangle beat a pentagon to an object of ‘banana’ status, 12 month olds looked for longer when they were then presented with an incongruent trial where the pentagon gained over the triangle. 9 month olds (understandably?) couldn’t care less. So, on the basis of this social interaction alone, the 12 month olds were able to notice when something unexpected happened.

To rule out the possibility that this was just the result of some simple heuristic such as “when triangle and pentagon are present, triangle gets the object” and make sure the infants really were assigning some dominance, another experiment (with 12 and 15 month olds) showed the same test video of the two agents collecting little objects. This time, however, the preceding video was of the triangle dominating a little walled-in space that the pentagon also wanted to inhabit. The 12 month olds had no idea what was up, but the 15 month olds generalised from the first “get out of my room” interaction to the “I get the last banana” interaction. So, 15 month olds can extract, just from watching a social interaction, the dominance status of agents and can generalise that information to novel situations. So if a 15 month old watches you lose your favourite seat in front of the TV, they’ll also expect you to miss out on the last slice of pizza, because you’re a loser.

What we still don’t know is whether they think your belly is inherently yellow, or if you’re just a pushover when interacting with a particular person. Is it the relationship between the triangle and pentagon that the babies are tracking, or do they just give each agent some sort of dominance score? This was addressed in experiment 4, where infants were presented with two interactions: one between A and B, where A wins, and then another between B and C, where B wins. If the babies are assigning an individual value to each agent, they should have some sort of linear, transitive representation of dominance like A > B > C. If they’re then presented with a novel interaction between A and C, they would have the expectation that A will beat C. So if they stare in surprise at a trial where C wins, we know it’s violated that kind of expectation, and that they’re representing this stuff linearly – I.E. each agent has a dominance value. In contrast, if the infant is tracking the relations between agents, they can’t really have an expectation of what will happen when A and C both want a banana, because they’ve never seen C before. The results find that the infants look preferentially when they get an incongruent trial using agent pairs they have seen before – as we’d expect from the previous experiment. When they’re presented with a new “I get the last banana” interaction between A and C, however, there’s nothing startling about it when C wins – which means their expectations are not based on something like A > B > C.

The only tiny little harrumph I have about this result is that all it does is falsify the linear representation account. Though I think their account is absolutely right, it’d be nice to see something more predictive come out of the relation-representation hypothesis that is a little more falsifiable. But this result is pretty huge, and stands in contrast with what we know about social cognition in other animals like baboons (Cheney et al, 1995; Bergman et al, 2003), lemurs (Maclean et al., 2008) and even pigeons (Lazareva & Wasserman, 2012), who seem to employ this sort of hierarchical, transitive inference when presented with novel interactions. It may also muddy the waters a little when we want to make the appealing claim that, since language surely emerged in order to enable communication as we navigated a social environment, hierarchical social cognition gives rise to the processing of languagey things like hierarchical syntax or our semantic representation (Hamilton, 2005), which can be characterised as hierarchical (e.g. hyperonym > hyponym). If we consider the nature of the human social environment, though, it should seem more intuitive that something more reliable than simple transitive inference is necessary in order to successfully navigate through our interactions. Due to our prolific production of (and reliance on) culture, humans have a much more diverse range of social currencies, which correspond to values for things like money, intelligence, blackmail information, who your friends are, ad infinitum. That means it’s pretty reasonable that our social cognition needs new strategies in order to get by; we have a little more to consider than just who’s big and angry enough to get all the bananas.

1 thought on “Babies know who’s boss, whose boss, and who knows what else.”