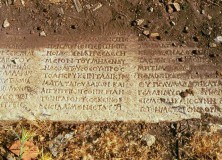 Here’s a talk by János Németh on the Prehistory of Evolutionary Linguistics.   Németh demonstrates that thinking about the origins of language predates the Enlightenment by over a thousand years.  Ideas that actually appear pretty modern were discussed in Ancient Greece.  However, after this initial burst of progress, there was a thousand year gap where no progress was made.  Why is this?  Németh argues that the Judeo-Christian tradition of creation would make questioning the origins of langauge difficult for centuries.

I found his discussion of Ancient theories of langauge evolution interesting and use them here to grind my own particular axe: the monolingual bias in linguistics (all the source material and the vast majority of the argument here comes from Németh’s thesis).

To summerise, Platonic idealism from Ancient Greece suggested a monolingual approach to language.  However, later Ancient theories saw linguistic diversity as a fundamental aspect of the early stages of language evolution.  They also thought about the experience of individuals in a community.  The Judeo-Christian approach to language undermined this position and re-introduced elements of the idea of a ‘perfect language’ and a monogenetic origin of language.  To get even more Dan Brown about it, I might suggest that this set the stage for the idealism of Chomskyan Generativism.  It is only relatively recently that the role of diversity in studies of the origin of language has been foregrounded again.

Németh (2011) presents a history of evolutionary linguistics starting with Ancient Greece.  Philosophers debated the origins of words and languages, including whether things got their names from nature or by arrangement. While this debate does have modern parallels, I won’t focus on them here.  Instead, we skip forwards to the 3rd Century BCE and the hypothesis of Epicurus.  Epicurus opposed the idealist  Platonic theory that there is by nature only one correct name for anything and that this name is known only to experts:

“…nor let us believe those philosophers who say that names were given to things by prescription and teaching so that men might have symbols of them for the sake of easy communication one with another. The idea is absurd, in fact it is more absurd than any absurdity as well as being quite impossible that anyone should bring together so many multitudes being only one himself-for as yet there were no kings nor even letters where there were no sounds-for as to these now for the mere collecting of these it needed a royal command for their collection to take place-and after bringing them together that he should instruct them like a schoolmaster, taking hold of a bough and touching each thing should say as he did so, ‘This is to be called stone, and this wood, and this man’…”

The criticism realises that, if language is culturally transmitted, then there must be limits on how linguistic coordination can spread through a society.  That is, incorporating a theory of how individuals} inherit language is important. Epicurus’s hypothesis on the origins of language emphasises the primacy of diversity between individuals:

Hence even the names of things were not originally due to convention, but in the several tribes under the impulse of special feelings and special presentations of sense primitive man uttered special cries. The air thus emitted was molded by their individual feelings or sense-presentations, and differently according to the difference of the regions which the tribes inhabited. Subsequently whole tribes adopted their own special names, in order that their communications might be less ambiguous to each other and more briefly expressed. And as for things not visible, so far as those who were conscious of them tried to introduce any such notion, they put in circulation certain names for them, either sounds which they were instinctively compelled to utter or which they selected by reason on analogy according to the most general cause there can be for expressing oneself in such a way.
Epicurus’ Letter to Herodotus in Diogenes Laertius 10.75-6  English translation from Chilton, C. W., ‘The Epicurean Theory of the Origin of Language. A Study of Diogenes of Oenoanda,Fragments X and XI (W)’ The American Journal of Philology, Vol. 83, No. 2, 1962, 160

First, this is a departure from the Socratic and Stoic ideas of there being a perfect word bestowed by nature for each meaning. The theory has echoes of modern hypotheses such as the emotional origins of protolanguage, pressure for communication and borrowing. It is also striking that Epicurus draws a distinction between the capacity for language and the cultural origins of languages (see also Bailey, 1947).  Németh points out that this theory is striking in its anti-religiousness and materialism which is ‘absolutely missing’ in writings on language from the Middle Ages (Németh, 2011, p.41).  However, it is also striking in its polygenetic view of the origins of language – that a language capacity arose in several communities but that languages arose culturally from their interaction.  This view is also expressed in the writings of Diodorus Siculus in the 1st Century BCE.:

Their words were confused, without any certain signification; but by degrees they spoke articulately, and making signs, and giving proper terms to every thing upon occasion. At length their discourse became intelligible to one another: but being dispersed into several parts of the world, they spoke not all the same language, every one using that dialect proper to the place, as his lot fell: upon which account there were various, and all sorts of languages in the world; and these associations of men first planted all the nations of the world.
Diodorus Siculus, Diodori Bibliotheca Historica, Vols. 1, 2, Bekker, I. – L. Dindorf – F. Vogel, Leipzig:Bibliotheca Teubneriana, 1888-1890, 1.8.3-4

Again, this view sees linguistic diversity as the initial condition and convergence to a single language as a product of contact.  The prior state emphasises differences between individuals and this explains the diversity of languages to some extent – communities not in contact could not co-ordinate.  Furthermore, there is a difference between these views and later views of what a `language’ is.  There is a tacit understanding by both Epicurus and Isidore that `languages’ emerge from interactions between people, and are not pre-defined entities.

The influence of Judaism and Christianity would undermine this view by introducing three ideas:  Language being a natural capacity of God, God’s language being perfect and humans as `fallen’ from a perfect state.  The impact of this on linguistic theories of language origins is stark in relation to this thesis as is apparent in the writings of Archbishop Isidore of Seville in the 7th Century CE:

The diversity of languages arose with the building of the Tower after the Flood, for before the pride of that Tower divided human society, so that there arose a diversity of meaningful sounds, there was one language for all nations, which is called Hebrew.
Isidorus Hispalensis, 1911, 9.1.1 English translation from Isidore of Seville, The Etymologies of Isidore of Seville, Barney, S. A. – W. J. Lewis – J. A. Beach – O. Berghof eds., Cambridge: Cambridge University Press, 2006

The myth of the Tower of Babel, sees linguistic diversity as both a secondary stage in human history and as a dilution or distortion of a `perfect’ state. Put another way, since a perfect language is a natural capacity of God and humans were made in God’s image, there needs to be a super-natural explanation for linguistic diversity.  The myth of the Tower of Babel fulfills this role.  Furthermore, it is God who instigates the confusion, dictating the separation of speech into discrete `languages’ (While Genesis does not discuss exactly how the languages were confused, this myth was extended in works such as the History of the Prophets and Kings (Tarikh al-Rusul wa al-Muluk) in Persia/Iraq the 9th Century and the Book of Invasions (Lebor Gabala Erenn) in Ireland in the 11th Century.  In these versions, the original language is split into 72 separate languages.  The Book of Invasions lists the languages in verse (see chapter 15 of The Book of Leinster Redaction ).  That is, discrete divisions between languages have been dictated by God.  The language groups are also scattered geographically. This makes it almost heretical to think about evolutionary explanations of the co-evolution of linguistic diversity and social structure.

Modern approaches to linguistics have perhaps inherited two aspects of this myth.  First, that linguistic diversity is something curious that needs a special explaining.  Earlier theories do not appear to be concerned with why there are mutually unintelligible languages (see above).  Furthermore, the idea that linguistic varieties diverge in isolated populations is relatively straightforward, but clashes with the idea of a linear trajectory of change from `perfect’ to less perfect.  The idea that linguistic variation arises due to isolation is only formally addressed in modern times by Nettle (1999).

Németh argues that the myth of the Tower of Babel myth also suggests that linguistic unity is needed for great undertakings, and that the function of language is to encode and represent the world in the most sophisticated way possible (Németh, 2011, p. 83).  That is, the desired state is monolingualism, since that fulfills the goals of facilitating communication and of reaching the `perfect’ language. (Although this is stepping further into speculation, I suggest that the modern paradigm of the Naming Game, e.g. Steels (2005), has its roots in this myth.  As I argue in Roberts (in press), the algorithm for the naming game is directed towards achieving a single language for the whole system, rather than an alternative goal such as all individuals understanding all varieties.  In many implementations, the measure of success is the convergence of the linguistic systems of individuals, not primarily the communicative accuracy.)

Németh argues that the Judeo-Christian traditions heavily constrained the study of the origins of language:  Firstly, the perfect language of God in Genesis both names things and commands them into being (Németh argues that this is linked with the concepts of naming and commanding having same root in Hebrew and Greek) is a throwback to Platonic idealism.  Also, the Talmudic tradition that the Torah existed in written form before the creation of the world makes language just as metaphysical as God, and therefore beyond the reach of a natural explanation.

The concept of a `perfect language’ was only discarded in the 18th century (Németh, 2011, p. 83), but the concepts about the nature and function of language survived.   Németh suggests that “If religious doctrines had not affected linguistics, then it is posisble that the millenial gap in scientific research would not have occurred and that the present understanding of the function of language would be also excessively different” (Németh, 2011, p.85).

7 thoughts on “Ancient theories of language evolution: The origin of the monolingual myth”