A new study appeared yesterday on PlosOne by Clay and Zuberbühler of St Andrews University on the communicative ability of bonobos.

Studies have been done in the past on language-trained bonobos such as Kanzi which have revealed some remarkable abilities that the species has with regards to representational and communication tasks.

These studies have focussed on trained apes which are reared in unnatural environments and extensively trained on artificial languages. This has produced some interesting results though research into bonobos’ natural communication has been thin on the ground until now.

Clay and Zuberbühler address this gap in the research with a playback study on the natural vocal communication of bonobos.

Bonobos are known to produce five distinct vocal signals when finding food, these have been demonstrated to be combined together to make longer call sequences. The study found that individual call types were poor indicators of food quality but that calls which displayed a concatenation of signals were much better indicators.

The study looked into whether receivers could extract meaning about the quality of food encountered by the caller by integrating across different call sequences.

They started by training four captive bonobos to find two types of foods in two different locations, those which are more preferred such as kiwis and those which are less preferred such as apples. The apes were recorded when finding these different food types and these recordings were used in the playback experiments. When the bonobos discovered their preferred food they emitted higher pitched long barks and short “peeps” and when they discovered the less-preferred food they made lower pitch “peep-yelps” and yelps. Sequences of the four calls which used different compositions were played back to bonobos who were familiar with those apes who had originally made the calls. All sequences contained the same number of calls. In response to these playbacks the study found that the apes devoted significantly more effort and time searching the space which was known to contain the food type indicated by the call sequence (shown in the graph below). 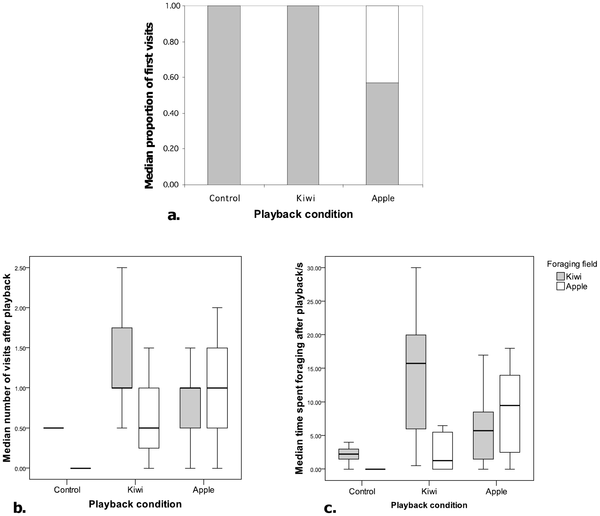 The bonobos were shown to attend not just to individual calls but to the entire sequences before they made inferences about the food encountered by a caller.

These results provide the first empirical evidence that bonobos are able to extract information about external events by attending to natural vocal sequences made by other bonobos. This study really highlights the importance of call combinations in their natural communication system.