Ravens can point. It’s scary how clever birds can be. 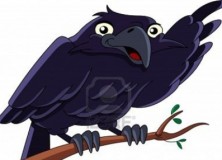 Ravens can point. It’s scary how clever birds can be. People keep sending me this paper so I thought I’d link to it here so that people know I’ve seen it and stop bothering me (I actually don’t mind being bothered, especially if it’s about interesting things like this, please don’t stop). Abstract below.

Around the age of one year, human children start to use gestures to coordinate attention towards a social partner and an object of mutual interest. These referential gestures have been suggested as the foundation to engage in language, and have so far only been observed in great apes. Virtually nothing is known about comparable skills in non-primate species. Here we record thirty-eight social interactions between seven raven (Corvus corax) dyads in the Northern Alps, Austria during three consecutive field seasons. All observed behaviours included the showing and/or offering of non-edible items (for example, moss, twigs) to recipients, leading to frequent orientation of receivers to the object and the signallers and subsequent affiliative interactions. We report evidence that the use of declarative gestures is not restricted to the primate lineage and that these gestures may function as ‘testing-signals’ to evaluate the interest of a potential partner or to strengthen an already existing bond.

If you’re interested in reading about referencial gestures in humans and chipanzees and why these things are relevant to the evolution of language you should read Michael’s post here.