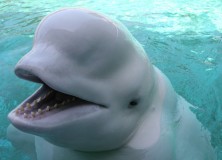 Lately, there have been a string of news articles regarding animals imitating human speech sounds. First, there was an account of the nine year-old beluga whale named NOC who was recorded making unusually low, clipped bursts of noise. Then, today, news from the University of Vienna was reported of an asian elephant named Koshik using his trunk to imitate Korean words.  Koshik does attempt to match both the pitch and timbre of the human voice, though the researchers doubt there is any meaningfulness to his phrases beyond an attempt at social affiliation.

The more interesting aspect of NOC’s speech is that, unlike the dolphins that are trained to imitate human noises or computer generated whistles, it is the first recorded spontaneous imitation of human speech. Similarly, the marine animals previously studied were raised primarily in captivity. NOC is not only a wild beluga whale, but his speech was also recorded in the wild. The study,  published in Current Biology, can be found here (only the abstract is available for free).