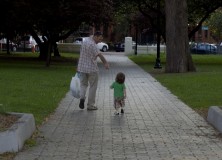 Though it has roots in 19th Century mathematics, the idea of recursion owes most of its development 20th Century work in mathematics, logic, and computing, where it has become one of the most fruitful ideas in modern–or is it post-modern?–thought. By making it central to his work in language syntax, Chomsky introduced recursion into discussions about the fundamental architecture of the human mind. The question of whether or not syntax is recursive has been important, and controversial, ever science.

My teacher, the late David Hays, was a computational linguist and had somewhat different ideas about recursion. When I say that he was a computational linguist I mean that he devoted a great deal of time and intellectual effort to the problem, first of machine translation, and then more generally to using computer programs to simulate language processing. Back in those days computers were physically large, but computationally weak in comparison with today’s laptops and smart phones. Recursive syntax required more computational resources (memory space and CPU cycles per unit of time) than were available. Transformational grammars were computationally difficult.

Hays was of the view that recursion was a property of the human mind as a whole, but not necessarily of the syntactic component of language. In particular, building on Roman Jakonson’s notion of language’s metalingual function, he developed an account of metalingual definition for abstract concepts that allowed for the recursive nesting of definitions within one another (Cognitive networks and abstract terminology, Journal of Clinical Computing, 3(2):110-118, 1973).

Given that Hays was my teacher, it will come as no surprise that I favor his view of the matter. But I will also note that I had become skeptical about Chomskian linguistics even before I came to study with Hays, though I had started out as a fan.

It is in that skeptical spirit that I present excerpts from two papers, one a bit of intellectual biography (Touchstones) and the other a formal academic paper centering on an elaborate and sophisticated model of the cognitive underpinnings of personal pronouns (First Person: Neuro-Cognitive Notes on the Self in Life and in Fiction).

Movies for the Baby Jesus, from Touchstones

As a child, perhaps I was 7 or 8, I received a toy. The toy came in a box. And the box fascinated me. On the top of the box was a picture, and in the picture was a boy. In the boy’s hand was a box. And on the cover of that box was a picture. In that picture was a boy. And that boy was holding a box. And on that box was a picture. ETC. And that “ETC” is what recursion is about–a way to use a finite number of symbols to indicate an infinite process. I would stare at that box and think, and stare, and think. For I perceived that the pictures of boys holding boxes went on and on and on. Only most of them were too small for me to see. But, though I could not see them, I knew that they were there.

At about the same time I had my first cosmological idea. It seemed to me that the entire world was but a motion picture which God projected onto a large screen for the pleasure of His Son, Jesus. Having figured that out, I was puzzled. If we were images on a motion picture screen, then how could we see one another, around one another? Motion picture screens were flat, and so were the images projected on them. But I was not flat. It was to be a long time before I became sophisticated enough to realize that three- dimensional objects are “flat” in a four-dimensional space, or, more generally, that N-dimensional objects are “flat” in an N-l–dimensional space,

This example also embodies the notion of recursion, but I’m not sure how or where. The example is perhaps a deeper one. In either case you should note that the questions I am trying, as a man, to answer, are the questions which I, as a child, posed. The child is father to the man.

With this in mind, I would like to shift gears a bit and consider an image from my childhood. When I was seven or eight I was given a toy which we can call the COSMIC RAY GUN–I forget the real name. It had the shape of a pistol, but it didn’t shoot toy bullets or even make toy noises. Rather, it was a device for projecting short film-loops on the wall. Each time you pulled the trigger it would advance the film one frame. This toy came in a box and the box cover had some lettering which proclaimed the toy’s name, COSMIC RAY GUN, a picture of the toy itself, and a picture of a boy holding a box. The boy’s box had some (somewhat smaller) lettering, COSMIC RAY GUN, a (somewhat smaller) picture of the toy itself, and a (somewhat smaller) picture of a boy holding the box. This regress went as far as the resolution of the image would allow, but I was just clever enough to be able to imagine it going on and on and on without discernible end. That is to say, my brain was somehow able to imagine that each representation could itself become the object of a representation.

Let us give Isaac a COSMIC RAY GUN and imagine him holding the box and examining it. The image manages to embed an box within a box, etc. to the limit of the resolution of the printing technology. Thus seven-year-old Isaac can clearly see the first several terms in what you and I know to be a potentially infinite regression. The question before us is how it is that Isaac can get intimations of that infinity given that, at seven years, his capacity for abstract thought is quite limited. Isaac is looking at the box. In particular, he is looking at the smallest boy–call him Raygun Boy–in the picture.

Time 2) Now set ego to Raygun Boy. One is, in effect, prepared to speak on behalf of Raygun Boy. The system (i.e. Isaac’s brain) now interprets the image before it as yet Another Raygun Boy on the cover of the COSMIC RAY GUN box, with its embedded series of images.

Time 3) Set alter to Isaac. Raygun Boy knows he is being observed by Isaac.

Time 4) Set ego to Isaac, who observes Raygun Boy on the cover of the toy box.

This process is not, in fact, a very coherent one. It begins to fall apart at step 3. The important point, however, is that by step 2 Isaac has managed to glimpse that there is, in principle, a series of boxes and boys beyond what he can actually see. Anything beyond that point is simply uncontrolled flailing about.

What is important, however, is that in this example we can begin to see a cognitive basis for a concept of an infinite recursive process, an abstract mathematical concept having nothing to do with social interaction. The concept of recursion is central to twentieth-century developments in mathematics, logic, computer science, and linguistics [Note 10]. That it should turn up in an investigation of the neuro-cognitive basis of the self is thus gratifying, though perhaps not terribly surprising. What is more significant is that that investigation did not presuppose recursion, but rather arrived at it though a particular construction.