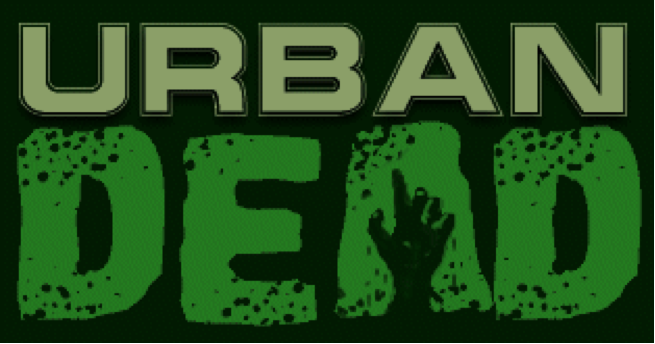 As readers of this blog will know, in evolutionary linguistics we use artificial languages in communication games all the time to investigate language evolution. However, these games, for the most part, remain very simple and confined to the lab. Massive multiplayer online role play games (MMORPGs)  may provide a new avenue for hypothesis testing in language evolution.

Below is just a case study of an MMORPG, so people can get an idea of what  we might be able to explore with a MMORPG set up. Though, this game was launched back in 2005, and was not designed as an experiment, so while there’s obviously experimental design issues, there’s still some pretty interesting things that have come out of it.

Urban Dead is a zombie apocalypse MMORPG by Kevan Davis. You can either be a “survivor”, with your main aim being to kill zombies and to stay alive, or a “zombie”, who try to kill survivors and eat their brains. When a survivor is killed, they become a zombie. Zombies can also come back to life. So nearly everyone ends up being a zombie and a survivor at some point.  When alive, players can interact as normal with other players in the same location, using a text field. However, when a player becomes a zombie their ability to use language is restricted. The game manipulates the input text for zombies using a set of rules which include, but are not limited to:

This constrained speech is called “death rattle”. As a result of these restrictions, several coded languages have emerged (e.g. Zombish and Zomese), which simply replace banned characters with combinations of allowed characters. 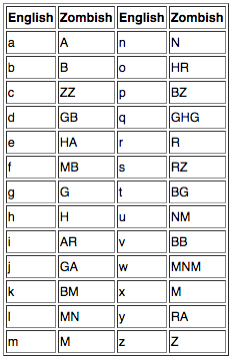 However, another language (Zamgrh) has also emerged, which uses a phonemic orthography. Zamgrh was originally bootstrapped by knowledge of English, but has since developed its own syntax, simple morphology and phonological rules. Some of these are similar to patterns found in pidgin languages, for example the use of “nah” before a verb as negation (1), and pronouns show no case, e.g. “ma zambah” can be used for “I” or “me” (1).

The lexicon of Zamgrh remains limited because of the constrained phonemic/orthographic limitations. Players are much more likely to use an existing word and allow context to dictate its meaning, e.g. using “babah” (baby) to mean “little”, “son”, “prince”, etc., which of course is facilitated by the context of the game being so small. Previously, small language populations have been hypothesised to use more context dependent language, because in tightly knit communities people have a lot of shared knowledge (see Wray & Grace, 2007). Zamgrh may help us shed light on whether context dependence is not only the result of shared knowledge, but also the result of smaller phoneme inventories allowing for less productivity in the language (interesting to think about in light of the correlations found by Hay & Bauer (2007) that small language populations have smaller phonemic inventories). There are many incidences in Zamgrh of established lexical items being adopted over new lexical inventions, even with knowledge of English facilitating new items being bootstrapped, almost certainly because of the constrained phonemic inventory. For example “barn” is used for any building, e.g. “Baghzbarn”, which refers to a warehouse, literally, “box barn” and “Agzbarn”, which refers to a fire station, literally, “axe barn”.

Death rattle may also have implications relevant to the size of inventories possible in different linguistic modalities, and how this might effect language evolution.

There currently exists a Zamgrh dictionary, as well as corpora containing some naturalistic zombie discourse and a small number of translated texts, including the poetry of Robert Burns (Rabar Barnz), Beowulf and some more contemporary texts, such as Rick Astley’s “Never gonna give you up” (Nabar Ganna Brang Gaa H!gh) and Queen’s “Bohemian Rhapsody” (Bahaman Rhabzag).

I have emailed the creator of the game, Kevan Davis, to see about the potential existence of a corpus of interactions as the language was developing, but this data is not available. Though, the data would be problematic anyway, as the the language seems to have developed quite a lot off-game by linguistics nerds, which is obviously not analogous to pidginisation at all. Also, the coded languages emerged much more quickly and more often than more pidgin-like languages, so any studies looking at using a similar paradigm would need to find ways to avoid this happening.

However, I think the game shows that with a bit more consideration for data collection and methodological problems, simple online games may become a useful tool for investigating mechanisms of pidginisation, linguistic bootstrapping, and conventionalisation.

Data and examples from the Urban Dead Wiki,  a list of contributors to the Zamgrh Project can be found here: http://wiki.urbandead.com/index.php/Category:Zombese_Linguists