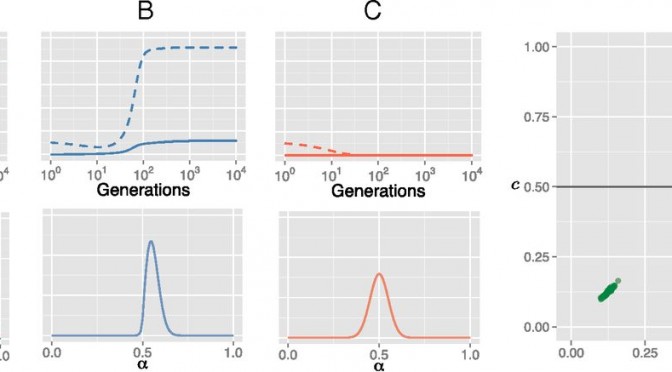 A central debate in cognitive science concerns the nativist hypothesis, the proposal that universal features of behavior reflect a biologically determined cognitive substrate: For example, linguistic nativism proposes a domain-specific faculty of language that strongly constrains which languages can be learned. An evolutionary stance appears to provide support for linguistic nativism, because coordinated constraints on variation may facilitate communication and therefore be adaptive. However, language, like many other human behaviors, is underpinned by social learning and cultural transmission alongside biological evolution. We set out two models of these interactions, which show how culture can facilitate rapid biological adaptation yet rule out strong nativization. The amplifying effects of culture can allow weak cognitive biases to have significant population-level consequences, radically increasing the evolvability of weak, defeasible inductive biases; however, the emergence of a strong cultural universal does not imply, nor lead to, nor require, strong innate constraints. From this we must conclude, on evolutionary grounds, that the strong nativist hypothesis for language is false. More generally, because such reciprocal interactions between cultural and biological evolution are not limited to language, nativist explanations for many behaviors should be reconsidered: Evolutionary reasoning shows how we can have cognitively driven behavioral universals and yet extreme plasticity at the level of the individual—if, and only if, we account for the human capacity to transmit knowledge culturally. Wherever culture is involved, weak cognitive biases rather than strong innate constraints should be the default assumption.