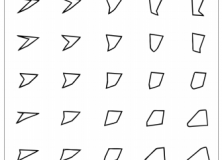 Next up is Catriona Silvey, Simon Kirby and Kenny Smith, who use an experiment which gets participants to categorise shapes from a continuous space either in a communicative condition or a non-communicative condition. You can read it here (you should, it’s really awesome, and I only describe it briefly below): http://www.lel.ed.ac.uk/~s1024062/silvey_cogsci.pdf

Silvey et al. are interested in how semantic categories emerge. They set up an experiment in which participants were given a continuous semantic space:

In the communication condition one participant was the sender and one was the receiver. The sender chose a word to communicate a given shape from the grid above, and the receiver had to chose which shape they thought the word referred too. Participants were then given feedback as to whether the receiver had chosen the right image. They were then given a score based on how close the chosen shape was to the original given shape. The sender and received swapped roles every trial. Together they labelled every shape 4 times throughout the experiment and the last label for each shape chosen by both participants were taken for analysis.

An optimal categorisation strategy within this game would be to give every shape its own label, however, memory constraints are likely to stop participants using this strategy. Given that you will score more if shapes are closer, it was expected that participants would use small, clustered and equally sized categories in order to optimise getting the right shape, and if not, maximising their score.

1 thought on “CogSci 2013: Communication Leads to the Emergence of Sub-optimal Category Structures”